SCOTTSDALE, Ariz. ‒ January 4, 2022 – Barrett-Jackson, The World’s Greatest Collector Car Auctions, today announced that a 1973 DeTomaso Pantera (Lot #3004) will cross the world-famous auction block during their 2022 Scottsdale Auction to benefit Barrow Neurological Foundation and their upcoming Neuro Night fundraising event. Accompanying the mid-engine Italian sports car on Friday, January 28, will be music icon, philanthropist and entrepreneur Bret Michaels, who is partnering with Barrett-Jackson to show his appreciation and to help promote the work being done at Barrow Neurological Foundation. Emmy Award, Golden Globe Award and Nobel Peace Summit Award Recipient and New York Times Best-Selling Author Sharon Stone is also participating in the promotion of the charity vehicle’s sale as the Neuro Night Honoree and a member of the Board of Trustees of Barrow Neurological Foundation.

“Helping raise funds and awareness for deserving charities has been a foundation of Barrett-Jackson dating back to the first-ever event held in 1967 that benefited the local Scottsdale library and community arts center,” said Craig Jackson, chairman and CEO of Barrett-Jackson. “Additionally, Sharon and Bret are longtime members of the Barrett-Jackson family and having them both help promote the sale of this Pantera for Barrow Neurological Foundation will surely make this charity auction one to remember as we celebrate our 50th Anniversary at the Scottsdale Auction.”

This black 1973 DeTomaso Pantera was donated by Bill Pope and Bob Lavinia, co-owners of the vehicle, who were thrilled to be able to support Barrow Neurological Foundation through this charity auction at Barrett-Jackson. It is powered by a 351 Windsor V8 engine topped with a pair of ported and polished Yates aluminum cylinder heads and produces an estimated 665 horsepower. The Italian sports car also has a 2.5-inch dropped floor pan and a pair of custom seats riding on a set of one-off custom wheels. Click here for Barrett-Jackson’s “First Look” of the 1973 DeTomaso Pantera.

“Every day, the innovative clinicians and scientists at Barrow Neurological Institute challenge accepted norms and constantly strive to find cures that will save lives,” said Katie Cobb, president of Barrow Neurological Foundation. “The generosity of our donors is the fuel for this success, and the donation of this spectacular sports car is just one example of their unprecedented commitment to raising funds to advance research and care for those suffering from the most challenging and debilitating neurological diseases.” 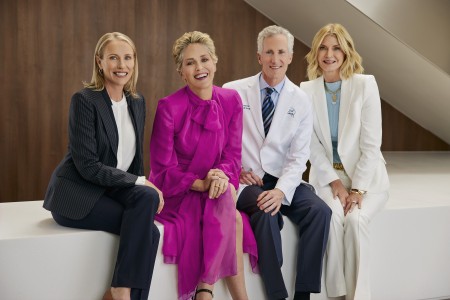 Neuro Night Honoree Sharon Stone is a survivor of a life-threatening brain aneurysm and stroke in 2001. A member of the Board of Trustees of Barrow Neurological Foundation, Stone credits Barrow Neurological Institute president and CEO, Michael T. Lawton, MD, for saving her life.

“The majority of people who go through what happened to me do not survive, let alone recover. I’m able to be here today walking and talking because of Dr. Lawton,” said Stone, expressing her gratitude for the Barrow physician.

World-renowned music icon, philanthropist and entrepreneur Bret Michaels will be on hand on Friday, January 28 when the Pantera crosses the auction block at Barrett-Jackson’s Scottsdale Auction to show his support for Barrow Neurological Foundation. Like Stone, Michaels also credits Barrow with saving his life following a subarachnoid brain hemorrhage in 2010. Two years later, Michaels designed, donated and opened the Bret Michael’s Hospitality and Music Room inside the Phoenix-based hospital to be enjoyed by both patients and their loved ones.

“I’m honored to be able to partner with Craig Jackson and Steve Davis at Barrett-Jackson to be able to give back to my good friends at Barrow, the hospital that helped to save not only my life, but Sharon’s and countless others,” said Michaels. “As a Type 1 Diabetic, brain hemorrhage survivor and someone who pushes his body to the limits both on and off stage, I have spent more than my fair share of time in hospitals. I know how important our healthcare workers, excellent medical care and great hospitals are. I couldn’t be more honored to be able to help support our frontline healthcare workers, the incredible neurosurgeons, research and education teams, entire staff and the patients at Barrow through this auction as well as through my Bret Michaels Hospitality and Music room at Barrow.”

For more information on Barrow Neurological Foundation and Neuro Night, scheduled for March 4, 2022, please visit SupportBarrow.org. To purchase tickets to the event, click here, and VIP packages are available here.