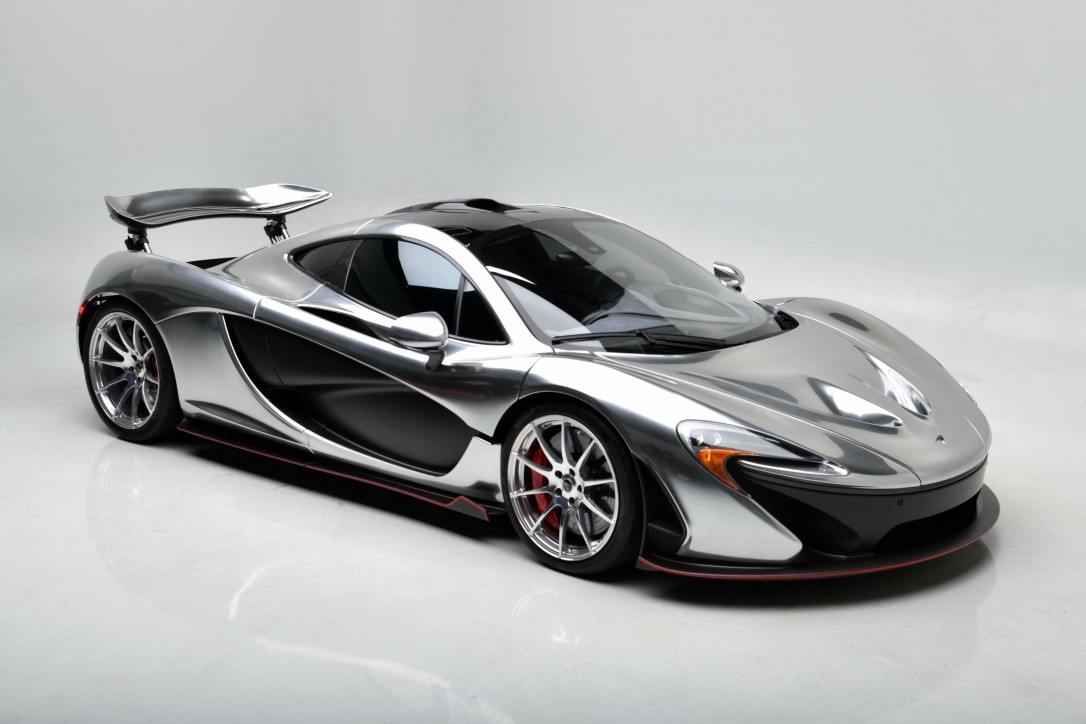 SCOTTSDALE, Ariz. ‒ January 13, 2022 – Barrett-Jackson, the World’s Greatest Collector Car Auctions, is gearing up for its premier Scottsdale Auction with an unparalleled docket of rare supercars and exotic vehicles that will cross the block at No Reserve during the auction company’s 50th anniversary celebration at WestWorld of Scottsdale, January 22-30. Among the coveted vehicles that will be auctioned in Scottsdale is the world’s first hybrid supercar, a 2014 McLaren P1 (Lot #1413), as well as a 2015 Porsche 918 Spyder (Lot #1405), one of only 918 produced worldwide.

“The supercars crossing our block bring an elite level of exclusivity to our Scottsdale event,” said Craig Jackson, chairman and CEO of Barrett-Jackson. “We’ve curated some of the most enviable contemporary supercars and luxury exotic vehicles that are coveted by collectors worldwide. Among them are two of the world’s most desired hybrid supercars, a 2014 McLaren P1 and 2015 Porsche 918 Spyder. Not only are these supercars rare, but they offer an exclusive ownership experience. Each of these will sell at No Reserve, giving our bidders the chance to become a part of an exclusive, VIP ownership club.” 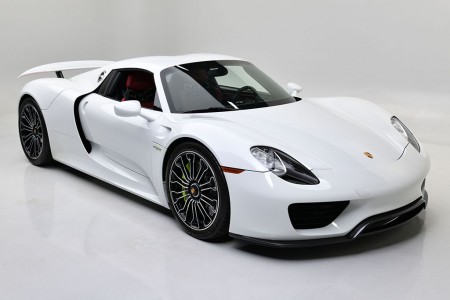 Engineered to compete against the McLaren P1, the 2015 Porsche 918 Spyder (Lot #1405) is powered by a naturally aspirated V8 engine derived from the RS Spyder LMP2 racecar and paired with Porsche’s 7-speed PDK dual-clutch transmission. The V8 works in concert with two electric motors located on both the front and rear axles. Click here for Barrett-Jackson’s “First Look” at this 2015 Porsche 918 Spyder.

A trio of Ford GTs will each cross the Scottsdale Auction block at No Reserve, including the first 2020 Ford GT to be offered at Barrett-Jackson. The 2020 Ford GT Carbon Series (Lot #1399) is finished in Black and features an exposed carbon fiber center stripe. This GT is powered by its mid-mounted, twin-turbocharged 660hp 3.5-liter EcoBoost V6 paired with a seven-speed dual-clutch transaxle. A limited edition 2019 Ford GT Heritage Edition (Lot# 1389) has less than 20 miles on the odometer and features the famous Gulf Oil racing paint livery, along with exposed carbon-fiber accents for both the interior and exterior. Click here for Barrett-Jackson’s “First Look” of this 2019 GT. The 2017 Ford GT ’66 Heritage Edition (Lot #1417) has only 36 actual miles and is finished in Shadow Black paint with silver stripes and Frozen White No. 2 graphics on the hood and doors. Click here for Barrett-Jackson’s “First Look” at this 2017 Ford GT.

“All the modern supercars and exotics crossing the block represent the dream cars that hang on walls in bedrooms and garages around the worlds,” said Steve Davis, president of Barrett-Jackson. “These aspirational vehicles fuel the dreamers who grow up with a passion for cars and become members of the collector car community. I look forward to feeling the energy that will fill the arena when these supercars and modern luxury cars cross the auction block.”

A special ordered 2015 Mercedes-Benz SLS AMG GT Final Edition Roadster (Lot #1345) is powered by a 6.3-liter V8 engine with an automatic transmission with 1,540 actual miles. The Final Edition SLS AMG GT was specifically made for Mercedes-Benz VIPs, with only 10 coupes and 10 roadsters allocated for North America.

The 2013 Ferrari 458 Italia Spider (Lot #1343) is among the last naturally aspirated mid-engine V8 Ferraris. It is finished in Rosso Corsa with tan leather interior and is powered by a naturally aspirated 4.5-liter V8 from the F136 family of engines. The 2019 Ferrari 488 Spider (Lot #1379) is painted dark green metallic over a beige interior and is a one-of-one Force of Nature EARTH model and has only 56 delivery miles.

Those interested in being a part of the 50th anniversary celebration and registering to bid for the 2022 Scottsdale Auction may do so here.

Other Super-car Electric to watch for.

The eight best electric supercars for 2021

While there are broad understandings of the hierarchy in power, price and performance in the sports, super and hypercar worlds there’s still a Wild West, frontier-like feel about their electric equivalents. Ahost of manufacturers are making bold claims about million-pound, all-electric hypercars with 2,000PS, 0-62mph in under two seconds and range to take you to the moon and back. Some of them you’ll have heard of, some of them are new players, but anyone with a whiff of realism will understand it’s easy to send out a press release with impressive stats and a few digitally enhanced pics to grab some headlines but rather more difficult to see it through to successful market launch.

We’ve tried to weed out the dreamers from our selection, the cars you see here hopefully credible contenders in the near-future of fully electric hypercars. These should all be around in 2021, but with electric supercars it is sometimes hard to tell.

The electric revolution has parallels to the earliest days of the automobile, given the emergence of a new generation of young entrepreneurs and engineers unafraid to think big. Mate Rimac is a perfect example, the Croatian starting out with an improvised electric conversion to his BMW racing car after he blew the original engine. In just a few short years his expertise is so in demand manufacturers are fighting each other for a slice, Porsche’s stake alone validation of his promise. The C_Two has the compulsory crazy stats required to operate in this field, the 258mph top speed backed up with a 341-mile range and the rigour of a proper testing regime to underline its credibility. Suffice to say, Rimac is a name you’ll be hearing a lot of in the coming years, whether on his own cars or as a consultant to more mainstream ones.

In a world packed with exotic brands and sometimes eccentric model names it’s something of a relief to find one you’ll have heard of, albeit as a styling house rather than a manufacturer. Bearing that in mind, remember what we were just saying about Rimac? Well, guess who supplies the electric powertrain for the Battista… With a comparable 1,926PS (1,900bhp) and 2,300Nm (1,702lb ft) from its four electric motors, the Battista’s development drive is no less than Nick Heidfeld  (he of 41.6 legend) and will be strictly limited to just 150 cars, of which five will be 2.6m euro Anniversario special editions. “I have piloted the quickest road and race cars in the world. I’ve never driven anything as powerful as the Battista,” says Quick Nick, should you not believe the numbers.

Described with typical Elon Musk hubris as “a hardcore smackdown to gasoline cars”, the second-generation Tesla Roadster promises seating for four, 10,000Nm (7,400lb ft) of torque, 0-62mph in less than two seconds, 250mph-plus and a range of over 600 miles. Or, at least, it did when Musk revealed it back in 2017 with the promise of it being the “fastest production car ever made, period.” A £38,000 deposit will secure one while £189,000 ‘reservation’ for one of 1,000 ‘Founders Series’ is also offered on the company’s website. So, when will it arrive on your driveway? Well, production delays are as much a feature of the Tesla story as ludicrous acceleration and eye-catching PR stunts so best not hold your breath.

Target output of 2,000PS? Check. Strictly limited production and a seven-figure pricetag? Check. Next-level performance claims? Again, check. With Lotus there is at least a respected brand name with a rich heritage, and reassurance from published test driver notes by Gavan Kershaw that it’s capable of more than sitting on a rotating plinth looking pretty. In keeping with Lotus traditions the Evija prioritises weight-saving, the claimed 1,680kg respectable for an electric supercar even if that means a smaller battery and shorter range than many of its rivals. We have, of course, been teased with bold promises by Lotus that never came to anything. But its new Chinese owners have the ambitions and – more importantly – the money to realise them. Fingers crossed.

The who-what? The name might not be familiar but, by now, the claims and numbers will be, the Aspark Owl promising – you guessed it – a 0-62mph time of less than two seconds, a combined 2,000Nm (1,480lb ft) of torque from its four electric motors and a top speed well north of 200mph. So far, so predictable, the Owl originating in Japan but due to be built in Italy and selling for a price just shy of 3m euro. Compared with the angular futurism of most in this sector the more swoopy, traditional curves of the Owl’s bodywork have a real sense of elegance and it’s one to be added to the mega electric hypercar grouptest as and when we get a chance to do that.

The brainchild of two Californian-based engineers and entrepreneurs, the four-seat Drako GTE ticks the expected boxes with a combined 1,216PS (1,200bhp) and 8,880Nm (6,571lb ft) from its four electric motors and boasts of a 200mph-plus top speed. The Nürburgring is a long way from San Jose but Drako claims the German track informs industry leading torque vectoring, with individual wheels adjusting their positive and negative outputs to help the GTE rail the bends with “a feeling almost as if the laws of physics have been exceeded.” With a price tag of $1.25m and production due to be limited to just 25 examples, the input of famed racer, restorer and all-round car-guru Bruce Canepa adding credibility to the project.

Nio is another brand you may not have heard much about but is actually more serious and credible than you might have assumed. After all, plenty have announced electric hypercars with bold performance claims. But Nio has actually delivered in one of the toughest environments possible with a 6m 45.9s Nürburgring lap in the hands of Scottish ace Peter Dumbreck. Some may question the relevance of such stunts to real world driving conditions but to even get a time on the board is an impressive validation of the EP9’s engineering, the stats offering an equivalent of 1,378PS (1,360bhp) and 6,334Nm (4,687lb ft). With downforce claimed to be twice that of an F1 car, fancy pushrod style suspension and the ability to pull more than 2.5 lateral G in the corners the Nio looks like a proper piece of kit.

Another multi-national start-up with a wacky name and novelty styling features (in this case doors said to open like the petals of an orchid), the Dendrobium takes its money and inspiration from Singapore but is engineered here in the UK with initial development work by Williams Advanced Engineering. Like the Lotus Evija, it targets a low kerb weight as a priority, which isn’t surprising given many of the people behind it cut their teeth a few years back as members of the team who developed (and sold) the McLaren F1. With that kind of mindset – and 1,824PS (1,800bhp) – hopes are high the D-1 will deliver at the more driver-focused end of the electric hypercar spectrum.